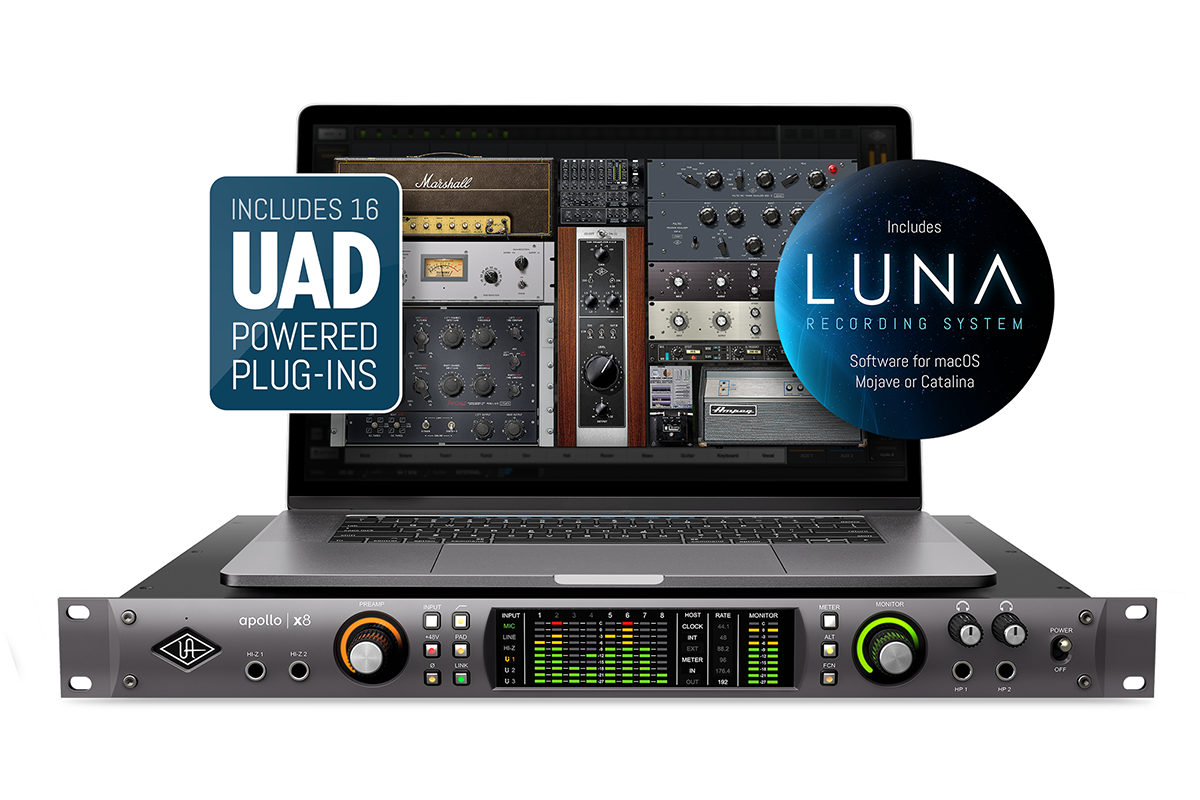 With 129 dB dynamic range and -119 dB THD+N, Apollo x8’s open, natural sound rivals any dedicated high-end converter on the market — regardless of price — and is the perfect starting point for applying UAD processing.

From the tube warmth of Pultec EQs on guitars to the musical tube limiting of the LA-2A on vocals, or the pump of a genuine 1176 or Fairchild 670 tube compressor on drums, your recordings will take a giant leap forward with a rich, three-dimensional analog sound that UAD plug‑ins provide.

The secret to Unison is its hardware-software integration between Apollo’s mic preamps and its onboard HEXA Core DSP Acceleration. Simply place a Unison preamp plug-in on your mic input in Apollo Console software, and it physically reconfigures the Apollo interface's impedance — so you can tap into the classic sounds of the world’s most recorded mic preamps.

A Full Suite of Classic Analog Processing Onboard

A hallmark feature of Apollo is its Realtime UAD Processing, letting you run the full library of UAD plug-ins with near-zero latency. Apollo x8 includes the Realtime Analog Classics Plus plug-in bundle, so you can record and mix with the world’s only authentic Teletronix LA-2A, 1176LN, and Fairchild compressors, the Unison-enabled UA 610-B Tube Preamp & EQ, and iconic guitar and bass amps from Marshall and Ampeg.

Apollo: The Choice of New-School Professionals

Apollo is the confirmed choice of hit-making professionals, used to record landmark albums by Kendrick Lamar (DAMN.), Chris Stapleton (From A Room: Volume 1), Arcade Fire (Everything Now), Post Malone (Beerbongs & Bentleys), and many more. The Apollo range of interfaces has earned numerous industry awards from Sound on Sound, Future Music, and Electronic Musician — as well as the prestigious 2016 TEC Award for computer audio hardware.

Going beyond the included Realtime Analog Classics Plus plug-ins, Apollo x8 lets you tap into the full UAD Powered Plug-In library of legendary vintage EQs, compressors, reverbs, tape machines, channel strips, and more — at near-zero latency, regardless of your audio software’s buffer size and without taxing your computer’s CPU.

With exclusive emulations from SSL, Neve, Studer, Manley, Helios, API, Ampex, Lexicon, Fender, and more,† it’s like having a studio full of iconic analog gear, in a single rack space. And unlike competing interfaces, these award-winning DSP-powered plug-ins are also available in your DAW for mixing.