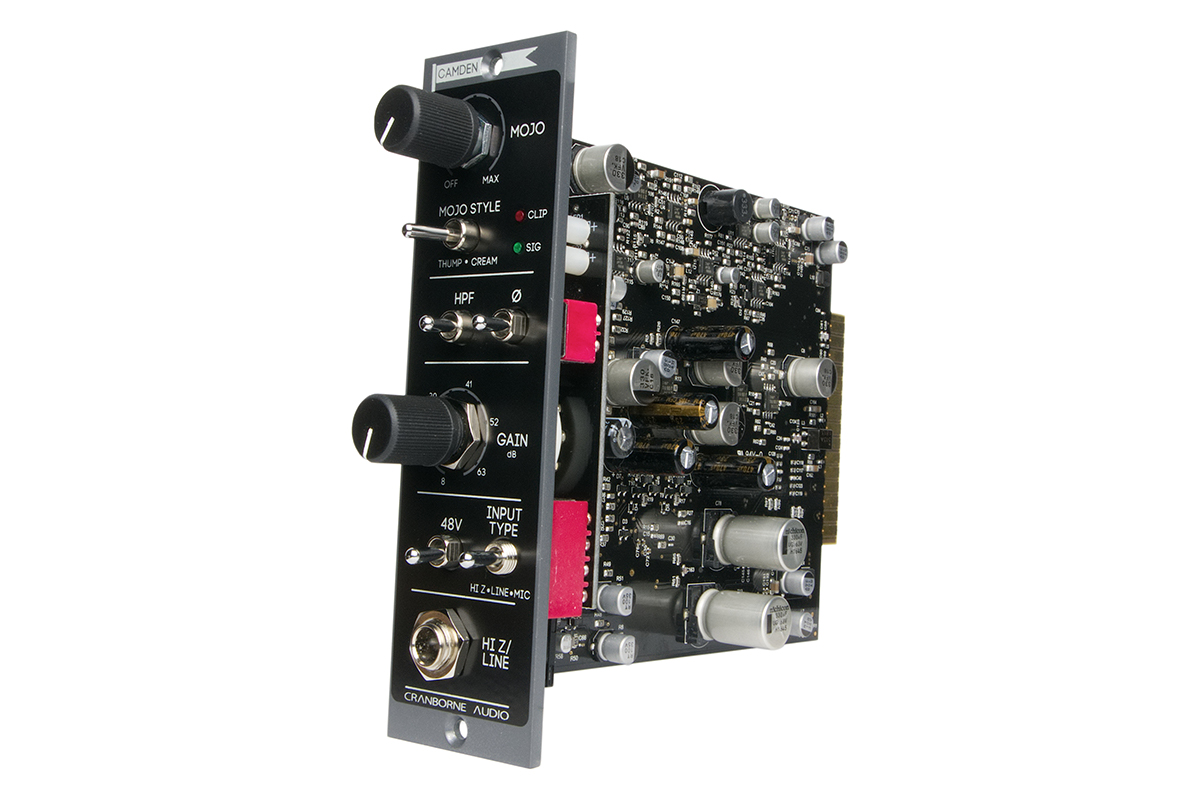 Put simply, Camden 500 is one of the cleanest, most linear, and transparent preamps on the market. Our new ‘Camden’ preamp topology allows us to push the boundaries of Frequency response, phase shift, noise, and THD performance; and we have all the specs to back that up.

Put simply, Camden 500 is the most astoundingly clean, linear, and transparent preamp you’ve ever heard.

Camden 500 was designed from the ground-up to be the ultimate front-end for the modern studio and engineer and to withstand the rigours of modern workflow and production techniques. It features a completely original, custom-designed ‘Camden’ preamp topology that achieves stunning low-noise and low-distortion performance as well as frequency and phase linearity at all gain settings. The sum result is -129.5dB EIN (150ohm, unweighted), THD+N as low as 0.0002%, frequency response of ±0.7dB from 5Hz to 200kHz at max gain and <2° phase shift @ 20Hz – 20kHz.

For moments when that extra bit of ‘British’ character is required, rather than use a transformer and learn to live with its drawbacks, Cranborne Audio developed Mojo - two discrete analogue saturation styles that transform Camden 500 into the fattest, warmest, and most characterful preamp in your arsenal - all at the turn of a dial. Perhaps best of all, unlike transformer and other legacy designs, Mojo can be subtle, it can also be exaggerated, but it can also be bypassed.

Clean, Precise, and Natural - at all gain positions

Whilst preamp specifications often quote fantastic figures at specific gain values, when the gain is increased, those figures often change radically. Camden 500 was designed to retain all of its impressive performance specifications at all gain positions from 8dB to 68dB. This means that even when the preamp is running at maximum gain, the Phase and Frequency response remains linear and THD always remains inaudible - enabling all gain positions to be usable for any source and mic combination.

Vintage, Warm, and Coloured - thanks to Mojo

Camden 500 features mojo - a new type of saturation circuit that consists of an array of filters and discrete second/third order harmonic generators that allow precise emulation of the saturation and low-end reinforcement behaviours of vintage transformer and valve-based equipment. The key to Mojo is that it can be dialled in to taste; use subtle amounts for gentle saturation, or dial it in to well beyond the point that destructive clipping would usually occur with transformer-based. Perhaps the very best part of Mojo is that it can be bypassed to reveal the pristine base sound of the Camden 500.

Thump is a style that works best on - but is not limited to - low-frequency based instruments. Thump excites low-end content by boosting harmonics in the range of ~100Hz to 20Hz and below without increasing the fundamental frequencies - resulting in fuller low-end on all reproduction mediums. As Thump is not EQ-based, the additional harmonic content is shaped by the source and it’s existing low-end frequency content resulting in a natural addition of extra “Thump”. Similar-sounding EQ moves will result in extreme wooliness as all sonic energy is boosted - even unwanted audio in-between the hits.

Cream introduces a vintage smoothness that enables tracks to sit deep within a complex mix in a way that cannot be replicated with EQ. The Cream setting drastically increases THD whilst smoothing-out the low-mids. As with Thump, Cream is not EQ based and is purely achieved by blending 2 saturation stages with the dry signal and additional harmonics. Cream varies entirely on the harmonic signature of the incoming source. It will increase high-end forwardness and create unique harmonic-based tonal shaping effects on mid-range instruments, but it will also add low-end on full range sources as well as unique “compression-style” effect on transients.