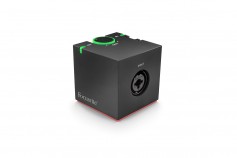 Never before have you been able to record a professional condenser microphone into your iPhone or iPad without needing any external power, making it even easier to record on the go.

The iTrack One Pre lets you connect a microphone or musical instrument to your iPhone or iPad (your iOS device), and is powered from the iOS device. The signal at the input socket is routed to the audio recording app on your iOS device via its Lightning connector. You can monitor your recording by plugging headphones into your device in the usual way.

The iTrack One Pre uses a renowned Focusrite analogue mic pre-amp design: as well as having great sound quality this can provide 48 V phantom power, so you can use a studio quality condenser microphone if you have one. The Combo input socket also allows direct connection of an electric guitar or bass - including those with high-output pickups.

With just one gain control, one switch and two LEDs, the iTrack One Pre has been designed to be as easy to use as possible. Connect it to your iOS device using the Lightning cable supplied, plug your mic or instrument into the input, set the gain and start recording - that's really all there is to it.

Note that your iTrack One Pre's base features a special material using microsuction technology. This sticks to a flat smooth surface such as a desk top, which means it doesn't move about while you're recording. If this should become less sticky over time because of accumulated dirt or fluff, it can be cleaned with a damp cloth.

Phantom Power from your Phone
Never before have you been able to record a professional condenser microphone into your iPhone or iPad without needing any external power, making it even easier to record on the go.

Officially for iPad and iPhone
Officially Apple MFi certified on all iOS devices up to the iPhone 6s Plus and iPad Pro, so you know it will work perfectly with your iOS devices and apps.

Plug straight in and use the illuminated gain halo to quickly find the perfect recording level. Green is good, red is clipping

Share your music with friends, release it to the world or listen back to improve your playing and singing

Compact and lightweight, with a micro-suction base to stick it on any flat surface, iTrack One Pre will stay put anywhere while you lay down your tracks with confidence.

You don't need to learn anything new. Connect a mic, guitar or other instrument to Garageband, Auria, Cubasis and your other favourite music making apps.